WITH THE STRONG DEMAND FOR NOBLE GASES, DME IS COMMITTED TO DEVELOPING THIS SECTOR

Noble gases or inert gases, are six gaseous elements found in small amounts in the Earth’s atmosphere. They include helium (He), neon (Ne), argon (Ar), krypton (Kr), xenon (Xe), and radon (Rn). This group of gases are only one percent of the Earth’s atmosphere. These gases were discovered by scientists in the late 1800s, and because they were so unreactive were initially referred to as inert gases. Although noble gases are often used to describe these elements, they are only rare in abundance relative to other gases found in the atmosphere of Earth.

Group 18 on the Periodic Table
The noble gases form the group 18 of the periodic table of elements, shown on the extreme right side. The rare gases are placed in the same group because their elements reflect similar properties. These noble gases are monatomic gases as they exist as individual atoms, and are all colorless, odorless, and tasteless.

One of the main features of noble gases is that they lack chemical reactivity. Helium, neon, and argon do not combine with other atoms to form compounds. Xenon compounds have been prepared, and contain mostly fluorine or oxygen atoms. Krypton and radon have also been combined with fluorine to form simple compounds. And because some noble gas compounds have powerful oxidizing properties they have been used to synthesize other compounds.

The low reactivity of the noble gases is due to the arrangement of electrons in the rare gas atoms. The configuration of electrons in these elements makes them very stable and therefore unreactive. The reactivity of any element is based partly on how easily it gains or loses electrons, which is necessary for an atom to react with other atoms. The noble gases do not readily do either. Because the noble gases are relatively unreactive, they are harmless to living organisms, except for radon, which is hazardous because it is radioactive.

Uses of Noble Gases
Helium has many high technology applications and is very much in demand. For other gases, some uses include – Neon is well known for its use in neon signs. Argon is used to provide an inert atmosphere in welding and high-temperature metallurgical processes. And Krypton and Xenon are used in commercial lighting applications. 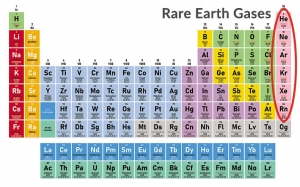 The six noble gases were discovered by scientists in the late 1800s and have many high tech applications.

Noble Gas
Properties in the US Southwest