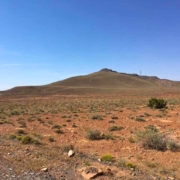 Vancouver, British Columbia — DESERT MOUNTAIN ENERGY CORP. (the “Company”) (TSX.V: DME) is pleased to announce that it has acquired an additional 3169 acres under lease for helium, oil and natural gas in the prolific Holbrook Basin of eastern Arizona.  The leases were acquired directly from the Arizona Department of Land.  They are situated in Coconino County, Arizona, in the Company’s Heliopolis project area in close proximity to its other holdings. They serve to further consolidate the Company’s property position in that area.

The leases in this last tranche are highly prospective for helium.  They are characterized by anticlinal features, monoclines and other geological structures with surface expression, together with reservoir rocks and salt and anhydrite cap rocks, giving them potential to serve as trapping mechanisms for commercially significant helium reservoirs.

The Company continues to be focused on development of its flagship Heliopolis helium project in Arizona’s Holbrook Basin and is presently readying applications for drill permits.  At the same time, it is also preparing a drill program at its Kight-Gilcrease Sand Unit helium, oil & gas project in Seminole County, Oklahoma.

According to Irwin Olian, CEO of the Company, “We are very appreciative of the continuing efforts of our Technical Team headed by Robert Rohlfing to continue to search out and acquire the most promising additional helium properties in the U.S. Southwest to add value for our shareholders. This effort is ongoing and an integral part of the Company’s long-term growth plans.”