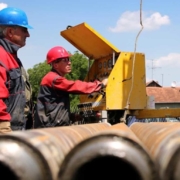 Vancouver, British Columbia — DESERT MOUNTAIN ENERGY CORP. (the “Company”) (TSX.V: DME) is pleased to announce Mr. Robert Rohlfing has been engaged as Executive Vice-President, Head of Technical Operations of the Company and of its U.S. subsidiary, Desert Energy Corp., a Nevada corporation. In addition, Mr. Rohlfing has accepted a position as a member of the Board of Directors of each company.

Mr. Rohlfing’s skill set includes extensive hands-on experience managing and conducting drill programs and production operations for hydrocarbons in the U.S Southwest. He has drilled some 250 wells in his career, all of which successfully encountered hydrocarbons with the exception of two. He has developed new drilling innovations, including techniques for tight radius shallow under pressure horizontal wells. For many years, he was recognized for his unique expertise drilling horizontal wells, one of which was the shallowest and tightest radius horizontal well drilled in the United States for natural gas at the time. He has drilled a well in Northern Arizona which encountered helium and has a thorough understanding of the geology of Arizona’s Holbrook Basin and its structural features which serve as potential trapping mechanisms for commercial helium reservoirs.

Prior to joining the Company, Mr. Rohlfing was President and a founding member of a number of private oil & gas exploration companies and drilling companies based in Oklahoma, including Seminole Oil Productions, LLC., vendor of the Kight Gilcrease Sand Unit oil & gas Project to the Company. He was responsible for overall leadership, strategy, planning and management, as well as exploration, development and production activities, sales negotiations and contracts and environmental, regulatory and safety compliance matters. His broad experience provides him with the clear perspective and experience required in a fast changing, highly regulated industry.

Mr. Rohlfing enjoys lecturing at universities, including the University of Oklahoma and Arizona State University, industry roundtables, oil & gas investor seminars and elsewhere on current topics of interest to the industry. He has testified before various government agencies on a variety of industry issues and serves on the Boards of a number of not-for-profit institutions. He has served as a geological referee and expert witness in courts in the U.S. Southwest. Mr. Rohlfing presently has residences in Oklahoma and Arizona. His educational background includes studies in electrical engineering at the University of Washington, environmental geology and biological systems at Arizona State University and geology at GCC in Glendale, AZ. He has written technical papers which have been published in trade journals.

According to Irwin Olian, CEO of the Company, “We are very excited that RobertRohlfing is now joining the Company as Head of Technical Operations, he brings a wealth of hands-on experience conducting and managing oil & gas operations and exploration, including considerable experience in our area of focus, the U.S. Southwest. He comes with outstanding credentials, knowledge and experience that will be invaluable in helping guide and develop the Company’s programs.”

In connection with the engagement of Mr. Rohlfing, the Company has granted him, subject to any necessary regulatory approvals, incentive stock options to purchase 600,000 shares of the Company’s common stock. These options are exercisable for a term of three years at the price of CAD $0.21 per share and are subject to the Company’s customary vesting provisions.