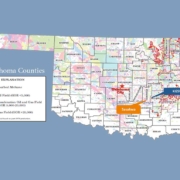 Vancouver, British Columbia — DESERT MOUNTAIN ENERGY CORP. (the “Company”) (TSX.V: DME | U.S. OTC: DMEHF | Frankfurt: QM01) is pleased to report that it is now conducting geological studies and gas sampling to determine the helium potential of its Kight Gilcrease Sand Unit oil and gas project in Seminole County, OK (the “KGSU”). The KGSU is situated in an area of Oklahoma which has been host to numerous helium bearing gas wells, with commercial production grades typically ranging from 0.6% to 1.4% He. While the KGSU
remains a strong target for enhanced secondary water flood production of oil, management believes the property also offers good potential for helium production. The Booch, Senora and Earlsboro Sands, from 2160 ft to 2728 ft, are regarded as highly prospective with a dense lime or anhydrite cap and close proximity to known or indicated fault structures.  The Company is presently testing gas from existing wells on site to determine presence of helium.  Commercial viability will ultimately depend upon grade, pressure and size of any helium reservoir. Results are expected shortly.

Targeting work and permitting is continuing at the Company’s Heliopolis Helium Project in Arizona’s Holbrook Basin, with good progress to date. Heliopolis remains the Company’s flagship project and management is looking forward to its upcoming drill program to test three targets in different areas in the Basin.

By way of background, The KGSU was permitted and approved by Oklahoma Corporation Commission (“OCC”)  by Order #375263 dated July 19, 1993, as an enhanced oil recovery project primarily utilizing water-flood secondary recovery operations, in an administrative proceeding which consolidated and unitized all working and royalty interests in the project.  The KGSU has had historic production estimated at 1,690,240  BO by the OCC and presently has 7 wells on site, one of which is operational. The oil produced is a light sweet crude that varies from 34 API to 43 API gravity.

The KGSU comprises an area of approximately 883.7 acres, which is substantially underlain by the Gilcrease Sandstone common source of oil supply.  The KGSU leases are located 8 miles S of Wewoka directly astride State Highway 56, in a portion of the S/2 of Section 6, all of Section 7 and the NW/4 of Section 18, T6N R8E Seminole County, Oklahoma.  It is not located within an environmentally sensitive area or on a known Native American reservation. The oil-bearing pay zone was estimated by the OCC to be from 10 ft to 40 ft in width and to occur at a subsurface depth of approximately 2726 ft to 2810 ft, as reflected in geophysical logs from the Adams #1 Maverick Well drilled in the SW/4 SE/4 SW/4 of Section 7-6N-8E, Seminole County.

According to Irwin Olian, CEO of the Company, “Whilst we have been advancing our Heliopolis Project in Arizona as quickly as possible and look forward to drilling in the coming months, we saw an opportunity to increase shareholder values by examining the helium potential of our Kight-Gilcrease property in Oklahoma. Accordingly, we are now testing wells on that property for helium content and are optimistic about the potential.”