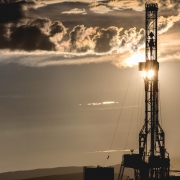 Vancouver, British Columbia — DESERT MOUNTAIN ENERGY CORP. (the “Company”) (TSX.V: DME, U.S. OTC: DMEHF, Frankfurt: QM01) is pleased to announce that the Arizona Oil & Gas Conservation Commission today granted the Company’s drill permits for the initial two holes in its planned helium exploration program in Arizona’s Holbrook Basin.  The two initial holes are situated in the Eastern portion of the Basin some 35 mi. from the iconic Pinta Dome, Navajo Springs and E. Navajo Springs gas fields.  These three fields produced an aggregate of 9.23 Bcf of gas grading 8-10% Helium over a 15-year period, among the richest helium fields in the world.

The two holes are planned to be simple, vertical gas wells drilled to a maximum depth of 2790 ft.  They will test a total of five possible pay zones which the Company believes are highly prospective and range in depth from 1020 ft. to 2690 ft. These holes offset an old potash well drilled in 1965 by a mineral resource company (ARKLA Exploration NMA #7) as a stratigraphic test that blew out due to extreme unanticipated gas pressure.  Targets for the Company’s upcoming program were developed over the past eighteen months as a result of comprehensive studies of historic geologic reports and drill log data, field studies and mapping, a 2-D seismic study and most recently, an advanced Remote Sensing Study utilizing infrared spectral analysis to locate certain neutron-deficient target isotopes generally associated with the presence of Helium.  This airborne geophysics survey provided strong results that corroborated our other targeting work. (See PR dated April 20, 2020).

The Company will be finalizing contracts with a seasoned drilling contractor shortly for a rig and will announce a tentative June start date for the program in the near future.  The drill program will be overseen by the Company’s Head of Exploration and Technical Operations, Robert Rohlfing, a highly experienced driller and executive who has drilled over 250 wells in his career with a very high success rate. According to Mr. Rohlfing, “We are very pleased with the Commission’s decision to greenlight the Company’s drill permits at this time.  We were very careful in our initial targeting decisions to choose areas that provide for the least environmental impact at the surface together with the optimal locations downhole for successful commercial Helium production without the need for fracking.”