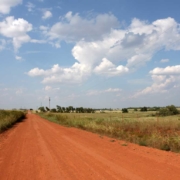 Vancouver, British Columbia — DESERT MOUNTAIN ENERGY CORP. (the “Company”) (TSX.V: DME) Desert Mountain Energy Corp. has now filed two separate applications with the Oil & Gas Conservation Division of the Oklahoma Corporation Commission in Oklahoma City to acquire drill permits for two new primary wells in the company’s Kight-Gilcrease sand unit (KGSU) oil field in Seminole county. The two wells will be simple, vertical wells drilled to a depth of approximately 2950 ft each from sites located at an altitude of about 887 ft, relatively high on the structures which are being targeted for their potential to host reservoirs of helium, oil & gas. They are designed to test five stratigraphic zones known to exist in the KGSU, namely the Calvin, Senora, Earlsboro, Booch and Gilcrease Sands, which are located respectively at 1170, 2490, 2620, 2670 and 2820 ft. Management anticipates that the permit applications will be approved shortly and does not anticipate any issues or delays. Drilling will commence shortly after the permits are granted, subject to drill rig availability.

The Company previously announced (see PR dated May 13, 2019) that analytical tests performed on gas samples from three existing oil & gas wells on the KGSU returned positive results for the presence of helium, with concentrations up to 1.3622% He. These test results are consistent with helium concentrations being produced from other U.S. natural gas fields in Kansas, Oklahoma and Texas. These encouraging results led management to conclude that a drill program to evaluate the helium potential of the KGSU should be undertaken as soon as practicable. Accordingly, management has devised a two-hole drill program designed to test the five zones noted above for helium, oil & gas. While the KGSU remains a strong target for enhanced secondary water flood production of oil from the Gilcrease zone, helium now adds a new dimension to the property.

Helium is the second lightest element (next to hydrogen) and has the smallest molecular size of any element on earth. Accordingly, it defies gravity and tends to rise to the surface of the earth’s crust and dissipate into the atmosphere and space unless it is retained by effective trapping mechanisms underground. The stratigraphic zones above the Gilcrease Sands are viewed as highly prospective for helium gas in the KGSU. These zones provide a wide target for additional helium, potentially higher in grade than that recently sampled from the Gilcrease Sands due to the above-noted tendency of helium to rise toward the surface. These zones are viewed as highly prospective because of their dense lime or anhydrite cap and close proximity to known or indicated fault structures. The recent discovery by the Company of helium gas just below them in the Gilcrease Sands is extremely suggestive that He will also be found in these zones.

By way of background, The KGSU was permitted and approved by Oklahoma Corporation Commission (“OCC”) by Order #375263 dated July 19, 1993, as an enhanced oil recovery project primarily utilizing water-flood secondary recovery operations, in an administrative proceeding which consolidated and unitized all working and royalty interests in the project. The KGSU has had historic production estimated at 1,690,240 BO by the OCC and presently has 7 wells on site, one of which is operational. The oil produced is a light sweet crude that varies from 34 API to 43 API gravity.

The KGSU comprises an area of approximately 883.7 acres, which is substantially underlain by the Gilcrease Sandstone common source of oil supply. The KGSU leases are located 8 miles S of Wewoka directly astride State Highway 56, in a portion of the S/2 of Section 6, all of Section 7 and the NW/4 of Section 18, T6N R8E Seminole County, Oklahoma. It is not located within an environmentally sensitive area or on a known Native American reservation. The oil-bearing pay zone was estimated by the OCC to be from 10 ft to 40 ft in width and to occur at a subsurface depth of approximately 2726 ft to 2810 ft, as reflected in geophysical logs from the Adams #1 Maverick Well drilled in the SW/4 SE/4 SW/4 of Section 7-6N-8E, Seminole County.

According to Irwin Olian, CEO of the Company, “We are very excited to be moving forward with our drill program on the KGSU, as it gives us potential for helium production in Oklahoma as well as advancing the water-flood program designed to be undertaken in the future on the KGSU to create secondary production of oil. These shallow vertical wells should be drillable quickly at low cost following permit approval. While the Heliopolis Project in Arizona remains our flagship property and immediate priority, it is encouraging to have another property in our portfolio with strong potential for future helium production. We are just now completing our seismic studies and targeting work on Arizona’s Holbrook Basin and expect to be filing drill permit applications there shortly.”