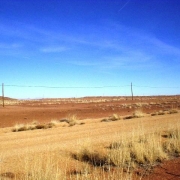 Vancouver, British Columbia — DESERT MOUNTAIN ENERGY CORP. (the “Company”) (TSX.V: DME | U.S. OTC: DMEHF | Frankfurt: QM01) announces that the City of Flagstaff (“Flagstaff”) has terminated the Memorandum of Understanding (the “MOU”) for mutual cooperation and strategic development of helium and hydrocarbon resources in the greater Flagstaff region and Coconino County, Arizona. The newly elected City Council determined that it had not had sufficient opportunity to address community concerns and elected to serve the Company with a written 10-day termination notice in accordance with the terms of the MOU.  At the same time, the Council terminated the related license agreement providing the Company with limited  access to City-controlled ground at Red Gap Ranch for purposes of seismic studies. The license agreement will continue for a period of six months during which time the Company may complete seismic studies if it elects to do so, subject to sharing the results of such studies with Flagstaff.

According to Irwin Olian, CEO of the Company, “We are disappointed that the City of Flagstaff has determined to pull back from its cooperative strategic relationship with the Company under the MOU, but understand that development of helium resources is outside the scope of their expertise and experience and there has been little opportunity for study by the new City Council.  We hope to have the opportunity in the near future to provide additional information and make a full presentation that addresses all concerns.”

“Helium has now been designated a strategic commodity by the U.S. Government and it is a green commodity that is in great demand by the high tech community and new economy.  It is now used in hard drives of computers at the big data centers to increase efficiency by allowing the computers to run smoother and cooler, lowering energy costs. It is used in MRI’s throughout the world to cool their big magnets. It is used to cool the cores of nuclear reactors to prevent meltdowns.  It is being used by Google in its Project Loon to bring internet to remote areas all around the world through a series of helium balloons in the upper atmosphere. It is used as a lifting gas and a host of other everyday uses like bar code readers in supermarkets. Even here in Flagstaff, Northern Arizona University scientists were advocating the use of helium in autonomous vehicles as a coolant to create energy efficiency for electric vehicles, thereby increasing range. Helium is inert, non-flammable, non-combustible and is a great boon to mankind, whilst free of any of the negative side effects of other gases and chemicals.  It is so safe that divers regularly breathe it in their scuba tanks where it is mixed with oxygen.  Helium extraction is minimally invasive and is done through shallow wells with very narrow pipes rather than mining operations, so there is no mine or unsightly scarring of the ground.”

“All of the Company’s helium leases were obtained on ground leased by the State of Arizona and the U.S. Department of the Interior Bureau of Land Management.  Hence, termination of the MOU will not impact existing exploration and development plans on the Company’s leases. We do hope, however, that over time Flagstaff will reconsider its position and recognize the opportunity which helium development could create locally for significant cash flow, job and infrastructure development with little or no footprint on the environment or local communities.”